NAHS Junior Megan Leary is an aspiring runner and friend to all. With her upbeat personality and humorous remarks, she is an asset to the North Attleboro Cross Country team both on and off the course.

Leary started running her freshman year and has continued to do so ever since. “I actually started running in 8th grade to prepare for soccer tryouts,” Leary says. “I ended up falling in love with the sport and started cross country that year.”

Megan has recently completed her junior year season of cross country and claims her favorite part of running is the satisfactory feeling after a good run.

“There’s really nothing that beats a runner’s high when you finish a long run,” she says.

Although running is a very rewarding sport, it can become mentally challenging for someone who is working hard to improve every day.

Leary explains, “The hardest part is staying motivated. It’s tempting to give up in the middle of a tough workout or race, but it’s worth it in the end to push through and finish.”

Megan  shared that her favorite meet was the Twilight meet which took place in Barnstable, MA on October 15th.

“This meet is one we always look forward to, the course is quick and running in the dark is an experience that only happens once a season, at this meet,” explained Leary. 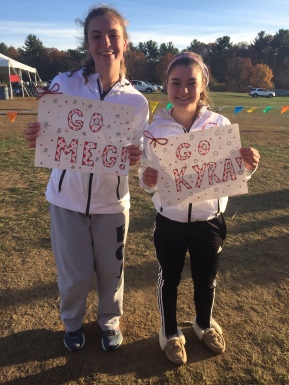 Megan ran her personal record for a 5k this year at the Twilight meet. Throughout this season, she also competed in varsity races in the Ocean State Invitational at Goddard Park, Bay State Invitational at Gardner Golf Course, as well as the Hockomock League Championships and the MIAA State meet at Wrentham Developmental Center.

Another memorable aspect of Megan’s season  was her week at Foss Running Camp in Strafford, New Hampshire. The North Attleboro Cross Country team attends this camp for a week in August to train with other teams from surrounding towns and states under experienced coaches.

“Foss is just the best,” Megan said. “You get to live independently, act like a child again, meet kids from other towns, and have absolutely no responsibilities.”

Megan and her teammates look forward to seeing new friends from camp at invitational meets. Thankfully, in this day and age, camp friends are able to stay in contact through social media.

Although Megan does not closely follow professional runners, she still looks up to people on the team and local runners.

“As a runner, I’m always looking for motivation. My teammates who are younger and older help push me every day and are a huge part of why I am the runner I am today,” said Leary.

Megan and her fellow runners also enjoy researching local high school and college runners who compete at a national level because it’s “highly inspiring” and “entertaining as well”.

When she’s not running, Leary likes to hang out with her two cats Rory and Polar and watch TV shows like The Office, Parks and Recreation, and Modern Family. Some of her favorite bands include AC/DC, Queen, and Duran Duran.

“One of the best songs to get me pumped up before a meet is ‘Come Sail Away’ by Styx,” she says, “followed by It’s ‘Still Rock and Roll to Me’ by Billy Joel.”

Leary will be a senior next year and is looking forward to running one last cross country season. In the meantime, she will participate in the long distance events of indoor and outdoor track, and she hopes to run a state qualifying time in the mile or the two mile.